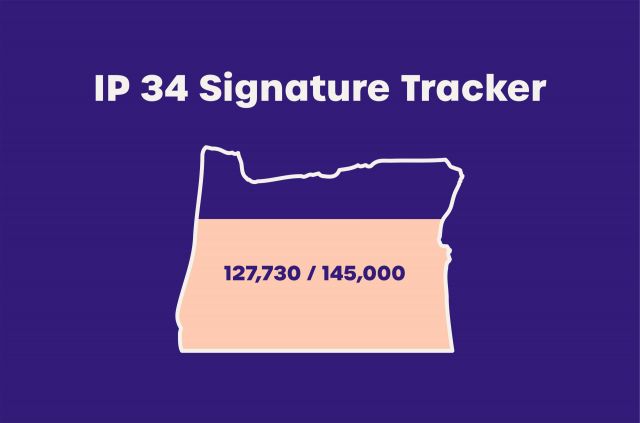 From a recent IP 34 campaign update:

Just two weeks ago, our signature drive was cruising to qualification. We believed we'd meet our goals in mid-April and qualify the Oregon Psilocybin Services Initiative for November. But then the world stopped.

There's no other way to say it: the dangers of the coronavirus have put our ability to qualify at risk and we need your help.

We have gathered 127,730 petitions for the November ballot. Our internal tracking tells us that we need to gather 145,000 total petitions, 17,000 more, to have enough valid signatures to make the ballot in November. Without being able to reach people on the street, our campaign is now turning to an online campaign to gather our remaining goal.

The world went into COVID-19 hibernation just as the Oregon campaign was approaching its signature target.

Obviously COVID-19 has disrupted a huge number of things. This is a blog about psychedelics, and IP 34 is one of the most interesting things happening in psychedelia at present, so let’s spend a little time on it.

Some background: IP 34 is a grassroots ballot initiative led by Tom & Sheri Eckert, therapists who live in Portland, Oregon. We learned about it in late 2018, and last year we did a fairly deep dive on the v1 initiative text. Since then, the initiative text has been reworked and the campaign has continued to gather steam.

From an August 2019 campaign update:

The goal was to bring real healing and real change to Oregon in 2020, using the ballot initiative as a vehicle. We drew up a detailed framework, worked with the Legislative Counsel, and ultimately submitted the first legislative language of its kind. We attained a Certified Ballot Title and began mobilizing volunteers.

During that time frame we also connected with Dr. Bronner’s Magic Soaps – one of the great activist companies in the world. They had been tracking us for some time. We immediately clicked with David Bronner and Les Szabo, as well as their close confidante Graham Boyd of the Psychedelic Science Funders Collaborative. We began teleconferencing and strategizing. They too saw benefit in revising the language, for the same reasons as Emerge did.

With the clock ticking, and a potential rewrite in the works, we conveyed that we’d need some assurances of financial support to help knock out the required 112,200 valid petition signatures on time. David provided those assurances.

Meanwhile, we learned that the Drug Policy Alliance (DPA) is exploring possible ballot measures to decriminalize possession for personal use of all drugs in several states, including Oregon. We support their powerful vision of addressing drug use through a health approach instead of treating it as a criminal problem. So, we made up our minds. Rather than duplicate the same effort as DPA, we would produce a new and improved bill to legalize psilocybin assisted therapy and drop the decriminalization aspect.

We had our marching orders. We hunkered down with Emerge and teleconferenced with David and Graham, and, over the course of a couple months, we drafted the most complete and dialed-in revision imaginable to legalize psilocybin therapy – a unique, world-class document. Much of the content reflects the earlier version, only cleaner, including:
- A framework for accessing psilocybin services
- Safety, practice, and ethical standards
- Services open to anyone who is not medically contraindicated
- An affordable, community-based framework outside the medical / pharma system
- Trained and competent facilitators (without requiring previous credentialing)
- Use of organic materials (mushrooms), not just synthetic psilocybin

Other inclusions were either new or augmented the previous provisions, while addressing a variety of concerns from the community. Some new highlights include:
- A strengthened Advisory Board, with directives to work with state and federal officials to create an environment of cooperation
- An extended development period so that the OHA can successfully roll out the program
- Prohibition of cannabis-style branding and marketing of psilocybin products
- Iron-clad protections against big corporate influences, including limiting business entities to a single production facility of limited size, or maximum five service centers (no big chains)

We haven’t poked into the v2 initiative text yet, but the v1 text seemed like a reasonable first pass at creating a state-level legalization framework for psychedelics, and I’ve gotten only positive signals from the campaign since then.

We'll probably write more about IP 34 and why it matters in the coming months. The short story is that if passed, IP 34 would help move psilocybin out of the “heroin” bucket (Schedule I drugs that are illegal in every state) and into the “cannabis” bucket (Schedule I drugs that are legal in some states such that the federal government leaves enforcement up to the states). This would have implications beyond Oregon – see e.g. the Cole memo.

The campaign has until July 2nd to hit its collection target (17,000 more signatures), and it has to do this via distributed signature collection. By normal measures July 2nd isn’t too far off, but in corona-time it’s eons away. So despite COVID-19, it’s still plausible that IP 34 qualifies for the ballot, and that would be a big deal.

For now, here are a couple calls to action: