LSD overdoses, or "For Tusko"

tl;dr: Taking too much LSD can be very intense, but is physiologically safe unless you're an elephant and your handler overdoses you on tranquilizers right after giving you an enormous dose of LSD. 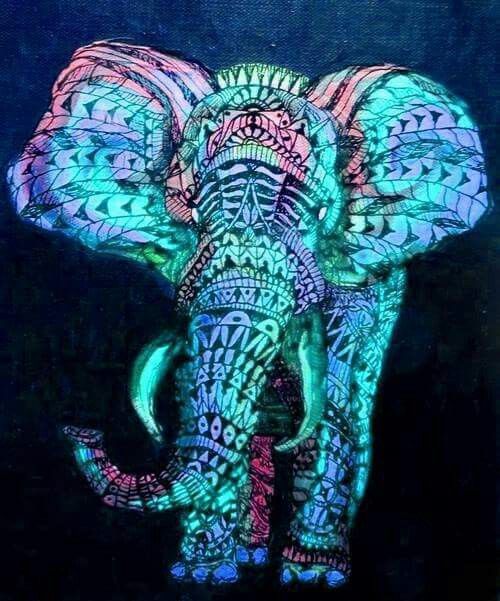 Haden & Woods 2020 is a short discussion of three cases of people taking way too much LSD. It's in the tradition of Klock et al. 1973, a case study of eight people who were admitted to SF General after snorting lines of LSD (having mistook them for cocaine) at what was likely a very far-out party.

Given this limitation, cases that happened "in the wild" are one of our better sources of information (we also sometimes do prospective animal studies but ethical considerations are at play there too, as well as the question of how generalizable effects in animals are to humans).

Like Klock et al. before them, Haden & Woods found no longterm negative effects in the cases they looked at, though there were alarming acute effects like vomiting & "blacking out." They also found some longterm positive effects, which is interesting.

Let's take a quick look at the three cases:

Let's look a bit closer at Case 1, which has the most interesting long-run effects and is also the best-documented, because we have notes from the girl's (pseudonym "AV") hospitalization.

When the girl's father arrived at the hospital:

AV’s father reported that when he entered the hospital room the next morning, AV stated, “It’s over.” He believed she was referring to the LSD overdose incident, but she clarified that she meant her bipolar illness was cured.

July 11, 2000 [shortly after the experience]: AV “came in today with a lovely fine balance and a glint in her eye and she is maintaining a happy and credible mood balance ever since the unfortunate incident that provoked her seizure three weeks ago” and AV “has not presented with as easy and healthy a presentation in many, many months.”

September 6, 2000: “She has remained remarkably stable this summer with no evidence of recurrent depression or mania” and AV “is doing remarkably well even compared to last year at this time when she was noticeably depressed.”

May 30, 2001: AV “has gone off her lithium and there are more mood instabilities as a result of that but no evidence of clinical hypomania or depression” and “we spoke carefully with mother, father, and AV – it is clear that no one has seen symptoms of clinical depression...” and “she has had a fairly successful school year other than the one term out of four and has not had a breakthrough of clinical levels of depression or mania.”

The LSD experience seems to have been a inflection point in AV's life:

AV’s father observed that his daughter appeared to be completely recovered from her mental health concerns after the overdose incident.

AV reports that she was free from all mental illness symptoms (bipolar or other) for the subsequent 13 years until she gave birth and experienced postpartum depression. The birth of her second child in 2017 was also associated with a turbulent emotional period. AV reports that after the LSD overdose incident she experienced life with a “normal” brain, whereas her brain felt chemically unbalanced before the incident.

Most infamous in the literature of LSD overdose reports is the case of Tusko the elephant, first reported in West et al. 1962.

This was a study of musth, a phenomenon wherein adult male elephants temporarily become very aggressive and start secreting a mysterious substance from the sides of their heads. West et al. were apparently trying to assess whether this secretion was causing the aggressive behavior, and decided to use LSD to induce a "pseudo-musth" state. (Who knows what they were actually thinking.)

Tusko, an elephant at a zoo in Oklahoma City, was given 297 milligrams of LSD (5x the amount that Case 3 snorted, which in turn was 550x a normal human dose). Things didn't go well: 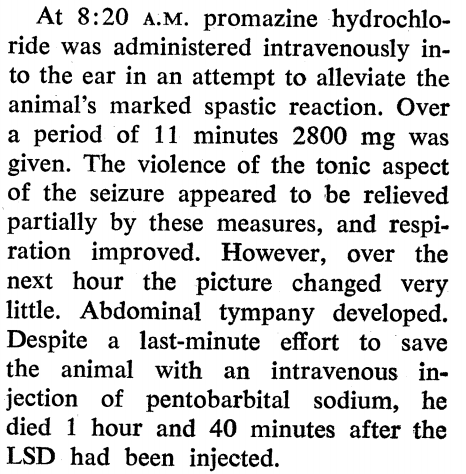 The image of Judy coming over to support Tusko is so sad.

It's a little unclear what happened here. Tusko was given a lot of LSD. 20 minutes later he was given Thorazine (~10x a human dose). Soon after that he was given an unspecified amount of pentobarbital. Then he died.

Who knows exactly why Tusko died, though it probably wasn't because of an LSD overdose. In 1984 another researcher gave only LSD to two elephants and both survived.