It's great for two reasons:

Carhart-Harris is the director of Imperial College London's newly minted Centre for Psychedelic Research; Friston is a famous neuroscientist.

REBUS is a (somewhat dubious) acronym for RElaxed Beliefs Under pSychedelics. The basic idea: psychedelics reduce the weight of held beliefs and increase the weight of incoming sensory input, allowing the beliefs to be more readily changed by the new sensory information.

(Scott Alexander's review of Surfing Uncertainty has a lot more on predictive coding.)

Carhart-Harris & Friston theorize that the main thing psychedelics are doing is relaxing the weight of the brain's top-down prediction-making ("REBUS") and increasing the weight of the bottom-up sense information ("the Anarchic Brain"). This allows bottom-up information to have more influence on our conscious experience, and also on the configuration of the hierarchy overall.

Carhart-Harris & Friston analogize this process to annealing – heating up a metal dissolves its crystalline structure, then a new structure recrystallizes as the metal cools:

The hypothesized flattening of the brain’s (variational free) energy landscape under psychedelics can be seen as analogous to the phenomenon of simulated annealing in computer science – which itself is analogous to annealing in metallurgy, whereby a system is heated (i.e., instantiated by increased neural excitability), such that it attains a state of heightened plasticity, in which the discovery of new energy minima (relatively stable places/trajectories for the system to visit/reside in for a period of time) is accelerated (Wang and Smith, 1998).

Subsequently, as the drug is metabolized and the system cools, its dynamics begin to stabilize – and attractor basins begin to steepen again (Carhart-Harris et al., 2017). This process may result in the emergence of a new energy landscape with revised properties.

Psychedelics "heat up" the brain, increasing plasticity and weakening the influence of prior beliefs. As the psychedelic stops being active, the brain "cools" – the hierarchy re-forms, though perhaps in a different configuration than the pre-psychedelic configuration.

This explains how psychedelic trips can cause changes that last long after the substance has exited the body – in those cases, the psychedelic facilitated a change in the organization of the brain's cognitive hierarchy.

In these disorders, new information can't revise the existing story of how things are, because strong priors suppress the new info before it can update anything.

The REBUS model straightforwardly explains how psychedelics help with disorder like this – by relaxing the strong top-down priors and boosting the bottom-up inputs, bottom-up inputs have more ability to effect the system. Here's an illustration from the paper: 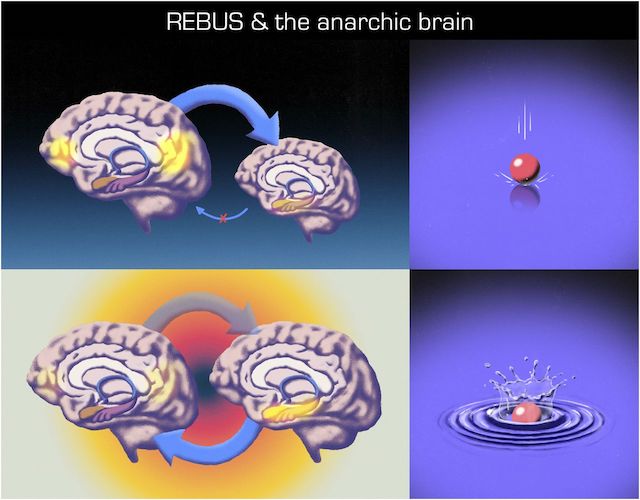 The top sketch is a brain where strong top-down priors dominate. New sensory inputs are suppressed and can't update the hierarchy. The bottom sketch is the same brain while on a psychedelic – the top-down priors have been relaxed and bottom-up sensory information flows more freely through the system, causing a bigger impact.

Okay, nice theory, but can we observe this in the brain? Is there any evidence for it?

In addition to the brain-scan-style evidence they cite throughout the paper, Carhart-Harris & Friston dedicate a long section to behavioral evidence ("Behavioral Evidence of Relaxed Priors under Psychedelics"). Briefly, there are several studies showing that surprise & consistency-making responses to sensory stimuli are reduced while on psychedelics, which is what we'd expect if the influence of top-down priors was lessened.

To sum up, REBUS and the Anarchic Brain places psychedelics in a predictive coding framework to give a unified theory of what psychedelics do – they decrease the influence of top-down prediction-making and increase the influence of bottom-up sense data. The theory has the nice quality of tying many disparate psychedelic phenomena together with an underlying explanation of what's going on. Plus, it gives a brain-based explanation for why psychedelic therapy is helpful for disorders like depression, anxiety, and addiction.