Continuing on from our discussion of Gabay et al. 2019, which looked into how MDMA affects decision-making in prisoner's dilemmas.

In the same study (though published separately as Gabay et al. 2018), Gabay's team also looked at another game – the ultimatum game. 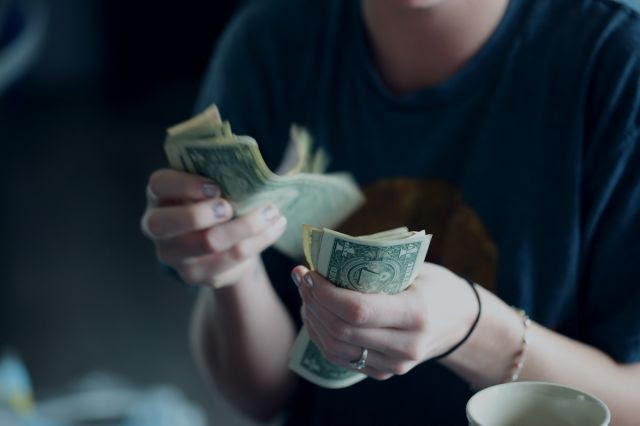 In the ultimatum game, one player ("the proposer") is given a sum of money and must offer some amount to the other player, then keeps the rest. The second player ("the decider") can either accept this offer, in which case both players receive their share of the money, or reject it, in which case nobody gets any money. (Here's a webcomic that gives a good walkthrough.)

The ultimatum game is interesting because it puts rational self-interest in tension with our ideas about fairness. If you're the decider, it is always more economically rational to accept what you're offered, even if it's not a fair split (getting some money, even a little, is better than getting no money). But in practice, many people reject unfair offers. 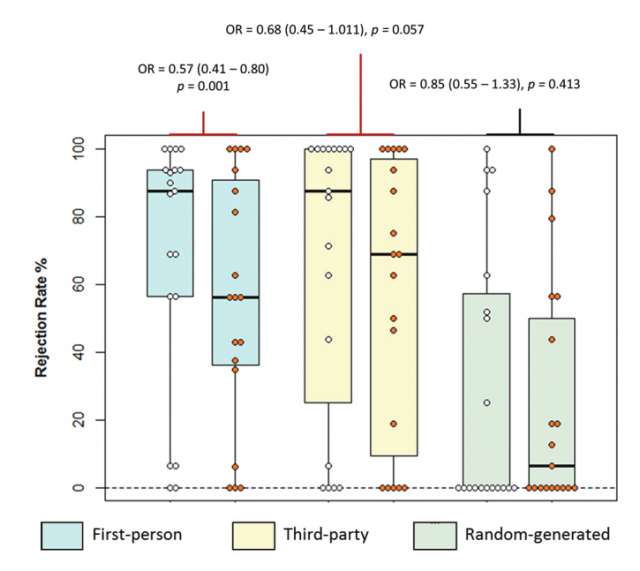 The chart shows results for unfair offers (where the decider would receive < 20% of the total). The white dots (to the left) are placebo, the orange dots are MDMA.

As in the prisoner's dilemmas, participants responded very differently when they thought they were playing with another human (first-person & third-party) vs. a computer (random-generated). When playing with the random generator, there was no difference between MDMA participants and placebo participants – almost everyone accepted whatever the computer offered every time, even if it was "unfair."

When participants thought they were playing against another human, there was more variation. MDMA participants accepted considerably more unfair offers than placebo when in the first-person situation, and somewhat more offers in the third-party situation, though that result didn't quite reach significance (p = 0.057).

At first brush, we might conclude that MDMA made participants more rationally self-interested (remember: it's rational to never reject an offer). But that's not what's happening here:

This interpretation is at odds with the finding that MDMA increased the amount offered when participants acted as proposers. Economic rationality suggests that one would offer the lowest amount possible. As such, we believe that the effect of MDMA on offers further supports the interpretation that these compounds alter social reward processing in the [Ultimatum Game].

When playing as the proposer, MDMA participants offered more money to their partner. That's not economically rational at all!

So what's going on? What is MDMA doing to make people more willing to accept unfair offers and more likely to propose generous offers?

I think it has to do with compassion.

We argue that [MDMA] altered participants’ conceptualisation of ‘social reward’, placing more emphasis on the direct relationship with interacting partners.

When you're playing something like the ultimatum game with another person, a part of you is imagining what it must be like from their perspective. And you're not just modeling their perspective in order to more effectively exploit them. You're empathizing with them!

When you're playing the ultimatum game on behalf of another person (the "third-party" situation), a part of you is imagining both what it's like to be the other player and what it's like to be the third party. You have empathy towards both of them! And because they are in opposing roles, you need to take both of their perspectives into account when making your decision. (This explains why the third-party result is not as dramatic as the first-person result.)

If MDMA boosts empathy, it would increase the weight given to other people's perspectives when playing the ultimatum game. But it wouldn't change anything about how you play the game with a robot. And that's exactly what we see in Gabay et al. 2018.

This lines up with the results of Gabay et al. 2019 too – MDMA boosts empathy & cooperation in decision-making, but it doesn't make you uncritical and exploitable. Next time we'll look at Borissova et al. 2020 and why its null result doesn't knock this down.