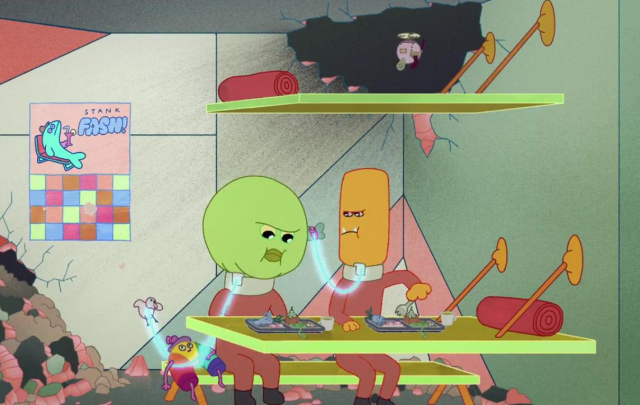 For helping with mental health issues like addiction, depression, and PTSD, the provisional answer seems to be "Yes, yes it can."

But what about for simpler stuff? Can psychedelics help us be kinder & more cooperative in our everyday lives?

The prisoner's dilemma is a canonical piece of game theory. Here's a quick recap:

Here's a chart representing the situation: 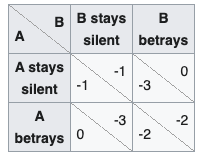 So what's the best thing to do? That's the dilemma.

Ideally you would both cooperate – that yields the best outcome for both you & your partner. It's the smallest amount of punishment overall.

But if you just consider your own situation, it might better to throw your partner under the bus (if you think they're going to cooperate) – if they stay silent, you would get to go free! However, if your partner follows that same logic, you would both receive a 20-year sentence.

This is a toy example, but the dynamic shows up everywhere. We're constantly confronted with situations where it'd be better overall to act in one way (telling the truth, showing up to meetings on time, following through on commitments), but better for us in the moment to act in a different way (a white lie to spare someone's feelings, being late, breaking commitments when convenient).

The stakes usually aren't as high as a 30-year prison sentence, so you get to play the game repeatedly, often with the same set of people. Over time, you get a feel for the different people you're playing with – some seem to be mostly cooperative, others only looking out for themselves. In game theory, this is modeled as an iterated prisoner's dilemma.

It's not a big stretch to imagine us all enmeshed in a web of interlaced iterated prisoner's dilemmas – a continual stream of decisions about whether we're going to cooperate with others in good faith, or instead find a way to defect & save ourselves. The aggregation of all these decisions is the world we end up living in.

Might MDMA be such a method? That's what Gabay et al. was investigating. Participants played six 15-round prisoner's dilemmas with three different kinds of partners – a trustworthy human who mostly cooperated, an untrustworthy human who mostly defected, and a game server who made a random decision each time. (In reality the "human" partners were also computer programs, but the participants apparently believed they were playing against other humans.)

Importantly, the trustworthy & untrustworthy partners weren't labelled as such... participants just saw that they were paired with "Greg" or whoever, and then had to discern the trustworthiness of their partner as they played. 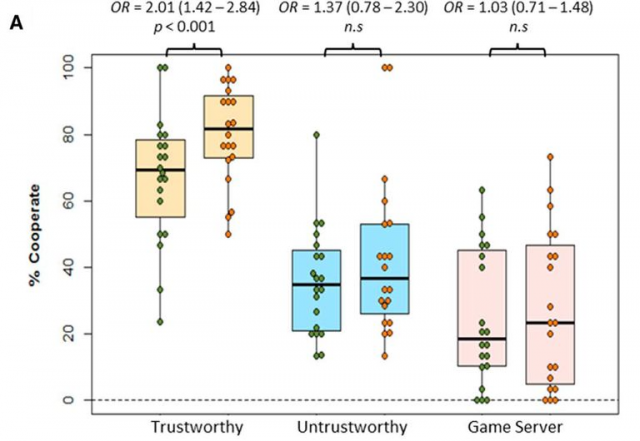 The green dots (to the left) are the placebo results, the red dots are the MDMA results.

A few things stand out:

That last point is so interesting.

I think there's a worry floating around that drugs, especially drugs like MDMA, will make you uncritical, dull, and dumb. You might grow more content & peaceful, sure, but at what cost?

That doesn't seem to be the case here. Participants on MDMA were more likely to cooperate when they thought they were paired with a cooperative player, but no more likely to cooperate when they thought their partner was defecting. They were still able to discern which players were cooperative while on MDMA, and they were able to protect themselves from being exploited when working with untrustworthy partners.

Gabay et al. isn't the final word on MDMA and cooperation – it's a small study that has limitations, and other papers have found contrary results (we'll talk more soon about how we might roll all these together into an overall picture about what's going on here).

But it's such a striking result – perhaps MDMA can boost goodwill & cooperation without a concomitant increase in naïvety. That would be a powerful thing.