Far before the current psychedelic renaissance, before the research freeze of the 80s and 90s, there was the first wave of psychedelic research. It was a glorious time, a time when researchers could publish journal articles about "normals" and no one would bat an eye.

McGlothlin et al. 1967 is from this happy before-time.

... which seems like a crazy way to do group assignment.

Set & setting was a comfortably decorated room, in groups of either 2 or 4 people. Music was played during the session.

But the people who didn't complete all three sessions still did the follow-up surveys (at 2 weeks and 6 months after the sessions).

These surveys asked a bunch of questions, and the psychological tests they were applying are pretty different from the tests they use today.

Things that high-dose LSD seemed to do, following self-report –

Lower anxiety. "At the six-month testing, 33% of the 200/µg LSD group subjectively reported lower anxiety and tension which they attributed to the drug experiences. The comparable percentages for the amphetamine and 25/µg LSD groups were 13 and 9." 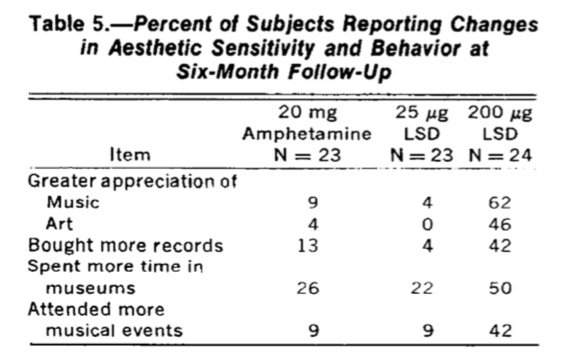 Increased creativity, maybe? "At the six month testing, 25% of the 200/µg LSD group felt that the drug experience had resulted in enhanced creativity in their work, as compared to 9% and 0% for the amphetamine and 25 µg LSD groups respectively."

But this wasn't statistically significant.

They applied so many tests to a small sample, maybe there was no difference at all? "The number of statistically significant differences between the experimental and control groups are not grossly inconsistent with the hypothesis that they arose from chance, considering that 22 tests were administered, some of which had multiple subscales, and all tests yielded two different scores."

Okay, so the groups weren't randomized & participants were surveyed out the wazoo, so there's not too much to safely infer from the McGlothlin 1967 surveys.

This is the kind of result that would be called "suggestive" – if the researchers were enterprising enough, they would proceed to put together a larger study to see what's what.

But this was the late 60s – the hammer was coming down on psychedelic research. No follow-up study was done, as far as I know.

The most interesting part of McGlothlin 1967 is the galvanic skin response (a) they took during the follow-up studies to get a more objective read on the anxiolytic effects.

Basically they hooked the participants up to a machine that registered electrical activity on the skin (I think? I don't really know how it works), then subjected the participants to a variety of exercises designed to provoke anxiety:

The fourth stimulus involved mental arithmetic (continuing to add 8 to a given number).

Here's a nice visualization of the results: 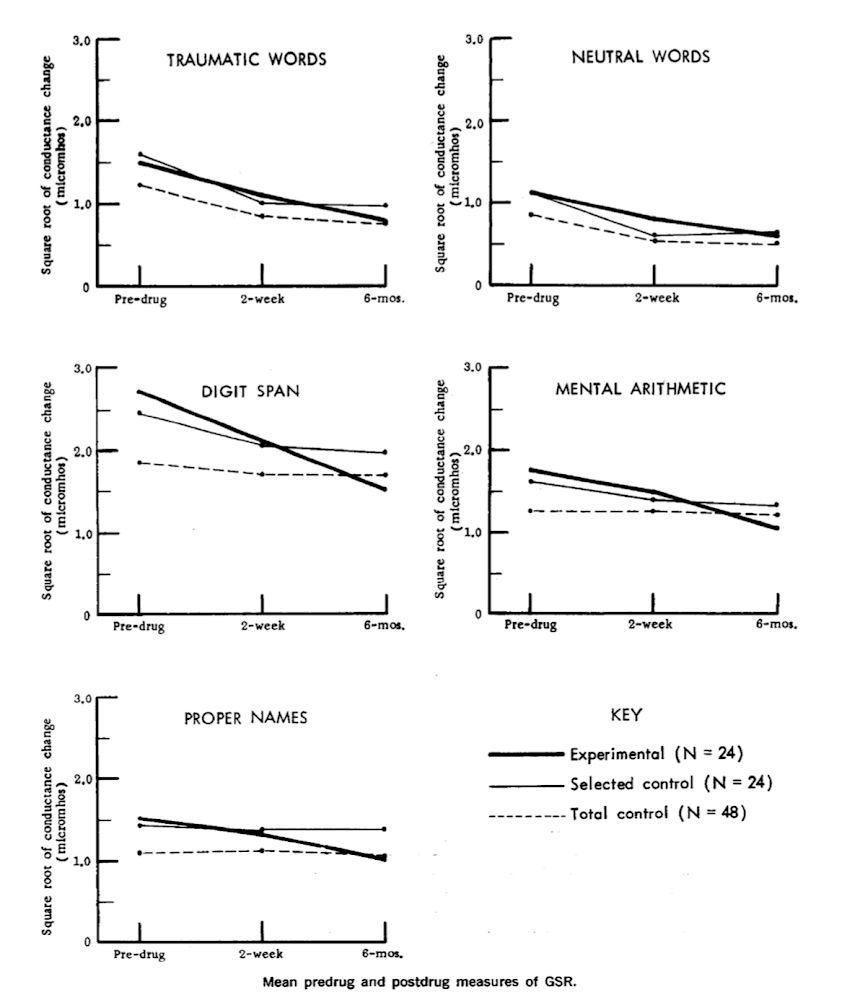 Basically, the high-dose LSD group had much lower galvanic skin response (implying lower anxiety levels) at 6 months than they did at baseline. The control groups didn't have as much movement.

(Note that the high-dose LSD group had much higher anxiety at baseline than control, due to chance. McGlothlin tried to correct for this by comparing to a "selected control" group of the control participants who had highest GSR response at baseline.)

This effect was especially pronounced for the digit span, arithmetic, and proper name tasks, though it also occurs for the traumatic words. (And not for the neutral words, as we'd expect.)

So that's pretty cool. Not only do the high-dose participants report less anxiety 6 months later, one of their physiological indicators also registers as less anxious 6 months out.