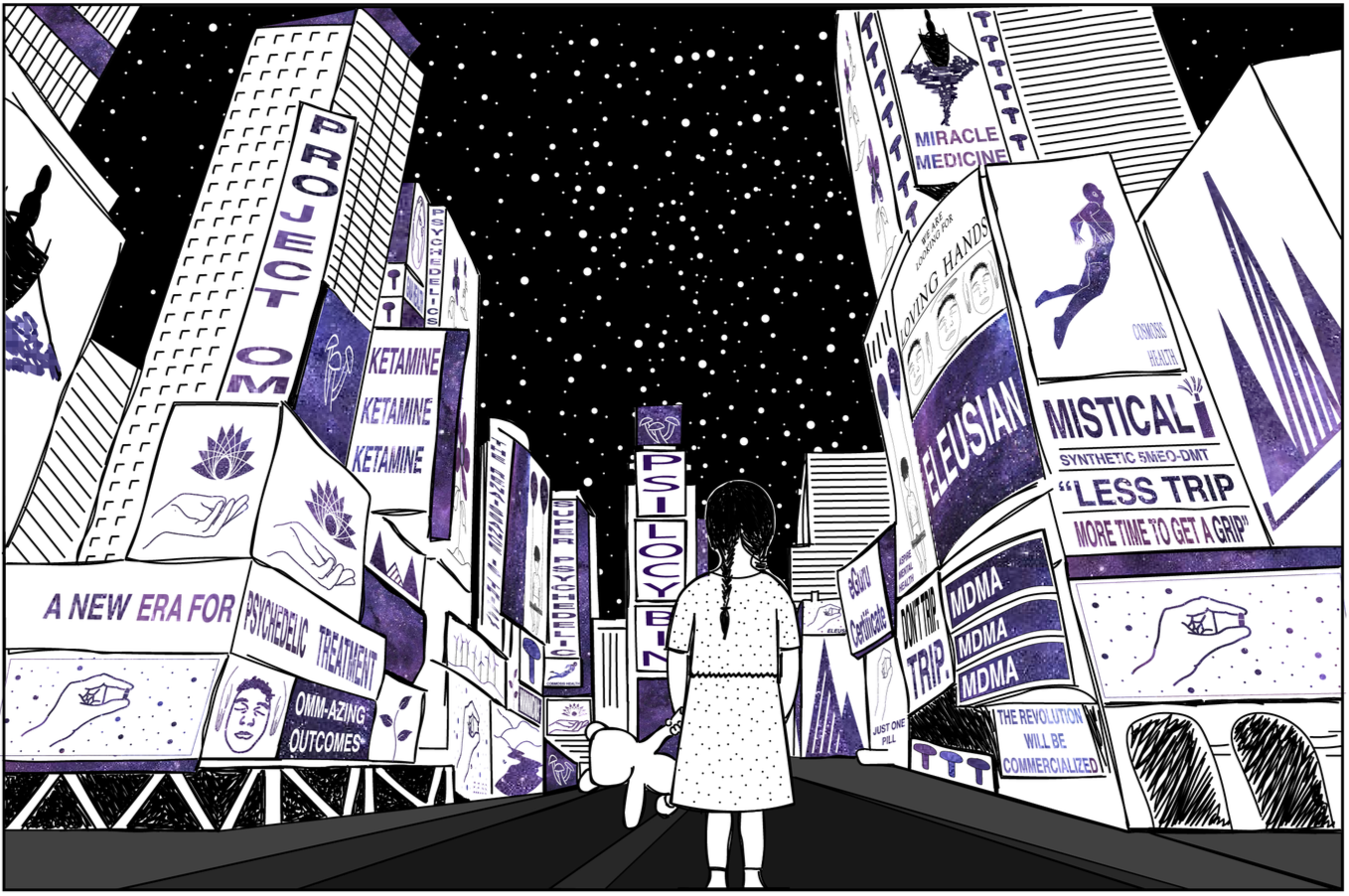 The Auryn Fund recently came onto the scene in a big way with their story, We Will Call It Pala (a).

I was taken aback when I saw it. A beautiful message, prescient, wrapped in an elegant design. Psychedelia corporatized, commoditized, trivialized.

Then I chatted with a friend about it, and my friend was like, "Nah, man, it's not a big problem."

The story is about Learie (get it?), an entrepreneur who starts a psychedelic clinic business called Gaia Health.

Learie starts Gaia Health for the right reasons – the world is pain; psychedelics helped her see this and come to terms with it; they can do the same for others. Psychedelics can help the world heal.

Gaia Heath rides the wave of the psychedelic renaissance. The plans get more ambitious, the capital raises bigger, the product more tech-enabled, the competition fiercer. Learie finds herself selling a mental health commodity, little different from her competitors except that her pricing is a bit higher and her hiring policy slightly more rigorous.

Eventually, Learie is forced out. A suit is brought in to run the show. Learie looks around, not recognizing the world she helped usher in.

But I think another question should come before that: what's so bad about the corporatization of psychedelics?

The world Learie helps build is a dark one – impersonal psychedelic clinics staffed by former nursing home employees, 5-MeO-DMT nasal spray muscled to center stage because a 5-MeO trip only lasts a few minutes (think of the unit economics!), marginalized communities pushed further to the margin as big pharma moves into the space.

The world is portrayed with Orwellian undertones (more World State than Pala), but who in it is worse off? Who is harmed in this vision of psychedelia gone off the rails?

The essay hints at marginalized groups like refugees being worse off, but it's not clear how or why that happens.

Learie's world is definitely imperfect, but it's plausibly a real improvement over the present state of affairs.

I think the main thing that's sad about Learie's world is that basically everyone misses the point.

Psychedelics have the potential to be transformative. I don't mean that in some vague, New Agey sort of way. I mean that psychedelic experiences can literally change how you think about your life, your story, and the world you live in.

Transformative potential like this is powerful, and it's not guaranteed to go in a positive way (though interestingly it tends to skew positive). This is a huge topic and I won't dive into it here. For now, I just want to observe that what generates a lot of interest in psychedelics is not the thought that psychedelic therapy will be somewhat better than the current standard of care, but that psychedelics could be radically transformative (see the Griffiths quote at end of Michael Pollan's New Yorker essay).

The same dynamic is at play for contemplative practices like meditation. People who get really enthusiastic about meditation tend to be excited about its transformative potential (1, 2, 3, 4, 5). This doesn't mesh neatly with how corporate business models work, so we end up with palliative presentations like Headspace.

(To be clear, I think things like Headspace are good & helpful to lots of people. The world where Headspace exists is better than the world where it doesn't, ceteris paribus. Yet alongside that, there's a melancholy that arises from seeing a potentially transformative thing being handled as a palliative.)

This dynamic arises in straitlaced domains too. In 1930, Keynes predicted that by 2030 most people would be living lives of leisure. And though we have gotten much wealthier over that span, most people don't spend most of their time on leisure presently, and it's very unlikely that this will change by 2030.

The interesting question here is "Why not?"

These are foundational questions (echoes of Moloch), and I don't yet have intelligible answers.

This sense of loss, this feeling of missing out on massive upside, is what's troubling about Learie's world. But it's also a troubling thing about our world!

I appreciate We Will Call It Pala for painting a specific vision of a suboptimal psychedelic future. It would be sad for us to collectively miss the point as we bring psychedelics more into our culture. But I think an imperfect rollout would still be a good thing.