This is a guest post by Andrew Zuckerman, Director of Operations at the Qualia Research Institute.

QRI is one of the most interesting research projects we've encountered – we're excited to be able to present an introduction to their work.

There’s a famous 1973 paper by geneticist Theodosius Dobzhansky called Nothing in Biology Makes Sense Except in the Light of Evolution. We at the Qualia Research Institute (QRI) are investigating an analogous claim: nothing in the psychedelic experience makes sense except in light of the Symmetry Theory of Valence. 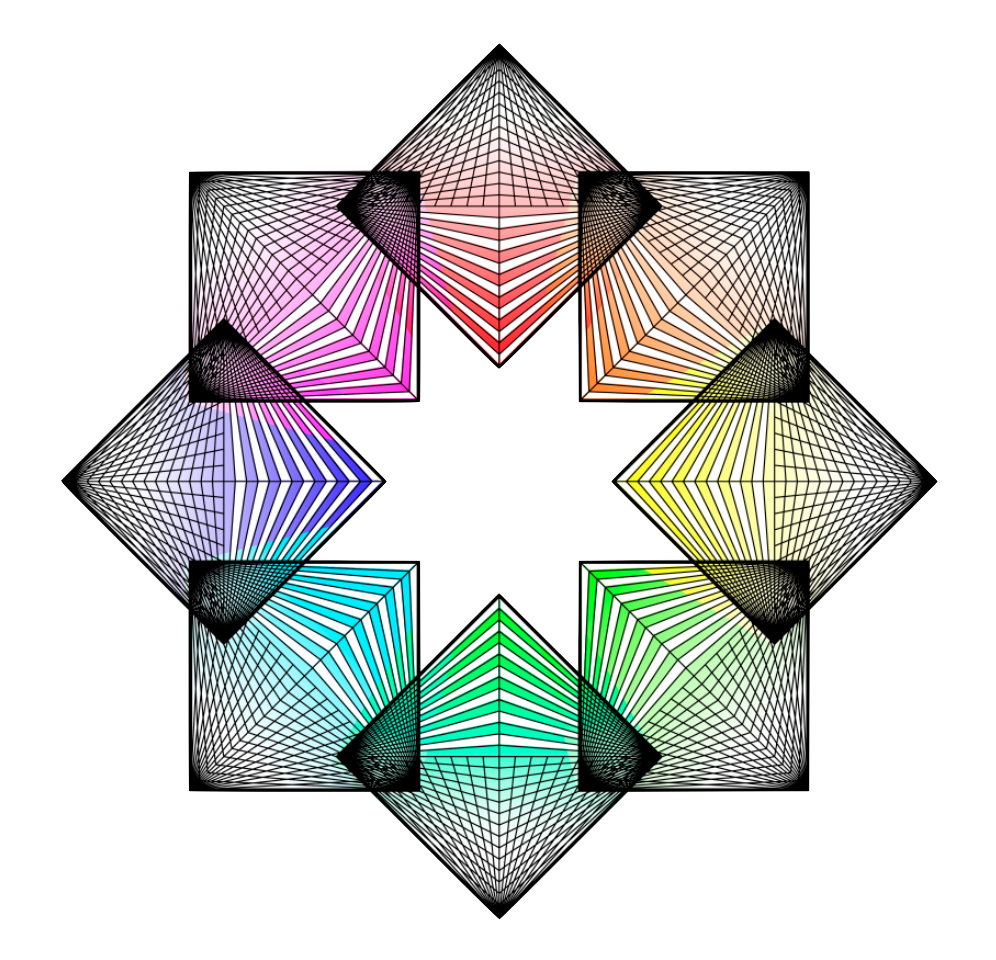 What is the Symmetry Theory of Valence (STV)? It’s one of the core theories we’re exploring at QRI, and we'll unpack it below. Mike Johnson, one of the co-founders of QRI, first proposed STV in his 2016 work Principia Qualia.

Andrés Gómez Emilsson, another QRI co-founder, recently gave a talk on STV at the Centre for Psychedelic Research of Imperial College London. Below we’ll discuss two slides from this lecture. You can also watch the full presentation and read annotated slides from the talk. 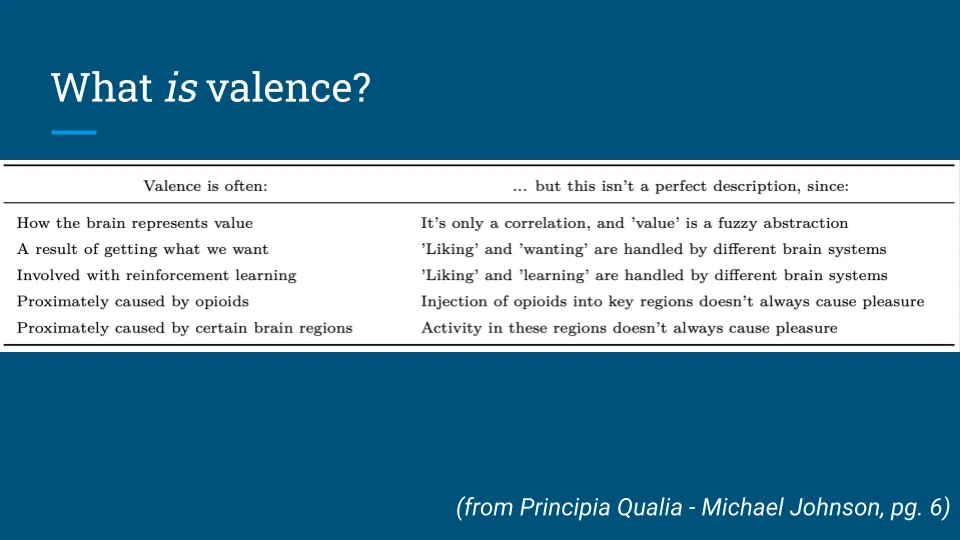 So what is valence? Is it… how the brain represents value? Something involved with how reinforcement learning operates in the brain? Or simply a feeling caused by opioids and/or particular brain regions?

These are all popular understandings, especially the dopamine = pleasure story. And there are lots of explanations of valence in the neuroscience literature that point to the mesolimbic reward system, reinforcement learning, and “hedonic hotspots” of the brain, like the nucleus accumbens.

But these explanations all seem somewhat lacking. Here’s Andrés on the matter:

There are a lot of theories of what valence is. Mike looked at the literature, did a deep dive into it and realized that they're usually unsatisfactory, or at the very least, they don't get at the true core of what an explanation for valence should be like.

You have these accounts of, for example, valence being how the brain represents value. Ultimately, that's just a correlation. Value is a fuzzy abstraction.

Some people think valence is the presence of opioids in the brain. But if you inject opioids in different parts of the brain, it doesn't always feel good. They actually need to be injected in a very narrow strip in the pleasure centers – otherwise, they just cause strange feelings or wanting. So they're not the signature of valence itself.

Or, for example, the pleasure centers. Just because you're calling something the pleasure center, and it's correlated with feeling good, it doesn't mean you have an explanation – it's not a very insightful, illuminating account of valence.

The explanations we’ve discussed so far are either nebulous & imprecise or are just imperfect correlations of valence when it shows up in mammalian brains.

It’s wonderful that we know so much about valence and its relation to human physiology, but these theories aren’t truly universal. A universal theory is one that has something to say no matter where we are in the universe! Or for this topic, something to say no matter what brain architecture an organism has. Discovering these universal laws is desirable because they help us both understand data that we have already seen and make predictions about data yet to be uncovered.

Let’s imagine that some alien arrives on earth with no nucleus accumbens, no dopaminergic pathways, and because we haven’t spent enough time with the alien, we don’t know anything about its values & beliefs. What can these aforementioned theories say about the valence that this alien might be experiencing? Absolutely nothing.

A complete theory of valence would be able to predict how pleasant or unpleasant it is to be that alien, because it'd be subject to the same laws of the universe that we are.

This brings us to the Symmetry Theory of Valence – 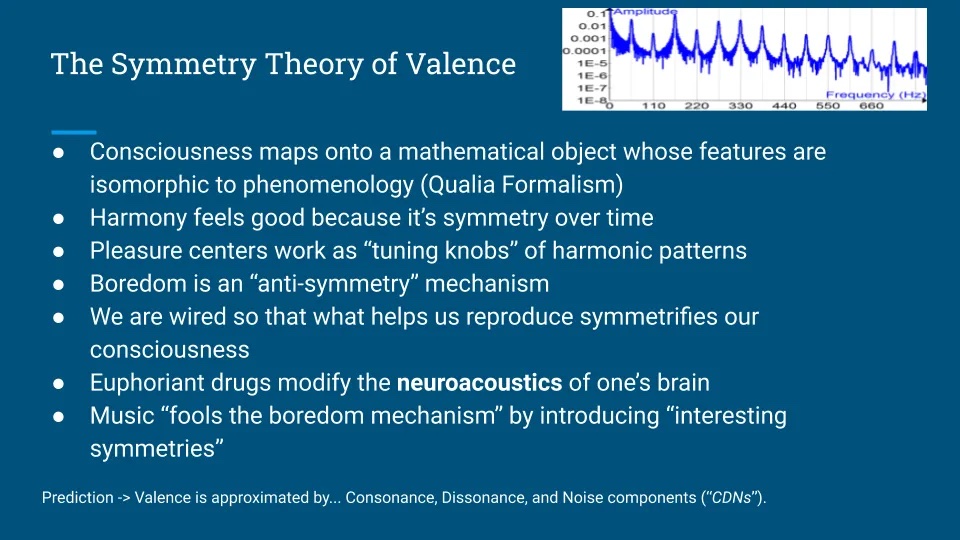 As Mike postulated in Principia Qualia, “Given a mathematical object isomorphic to the qualia of a system, the mathematical property which corresponds to how pleasant it is to be that system is that object’s symmetry.”

Let’s break that down. What does it mean for “a mathematical object [to be] isomorphic to the qualia of a system”? Essentially, it’s the assumption that for any slice of conscious experience, there is a unique mathematical representation that corresponds to that experience.

The second part of STV is then relatively straightforward – how good a subjective experience feels will relate to the symmetry of the mathematical object that corresponds to the experience, with symmetry being a well-established concept in both mathematics and physics. (You can think of mathematical symmetry as a more general version of the mirror symmetry you're probably familiar with already.)

If this is true, then we should expect that when a conscious being is experiencing a high-valence state, we would find a lot of symmetry in their brain data. And this would be true whether that conscious being is a human, an animal, or an alien.

This leads to clear experimental predictions, for example:

In STV, pleasure centers are like tuning knobs. They are these bridges that, when they get activated, enable global large-scale synchrony in the brain.

So it's a testable interpretation of what the pleasure centers even are.

You can learn about other predictions that arise from STV by watching the presentation and/or reading the annotated slides.

What about existing evidence in support of the Symmetry Theory of Valence? One example is the phenomenology of extremely blissful (i.e. high-valence) states, like those reported from 5-MeO-DMT experiences, or those experienced in advanced meditative states (known as jhanas). Experiences like this tend to have extremely low information content, which implies high symmetry:

There seems to be this projection of less and less information content in your experience. Going from having all of your attention concentrated into one point to then experiencing completely perfectly smooth, boundless space to then “experiencing” just pure consciousness, and then the “experience” of neither nothing nor something. In a sense, that's kind of approaching the limit of zero information.

There also seems to be a link between symmetrical stimuli and valence:

Why is deeply understanding valence so important? The most direct reason is that a mechanistic understanding of valence will allow us to quantify experience. Today, we don’t have much basis for objectively understanding what other people or animals are experiencing – a “9 out of 10” on my pain scale may be a “4 out of 10” on yours. The Symmetry Theory of Valence attempts to bridge that gap.

QRI begins executing on its roadmap to empirically test the Symmetry Theory Valence in 2021. If you’re interested in learning more, don’t hesitate to get in touch – we’re excited to chat with anyone who has questions about our approach!