Around this time two weeks ago, Trump supporters were in the process of storming the US Capitol. 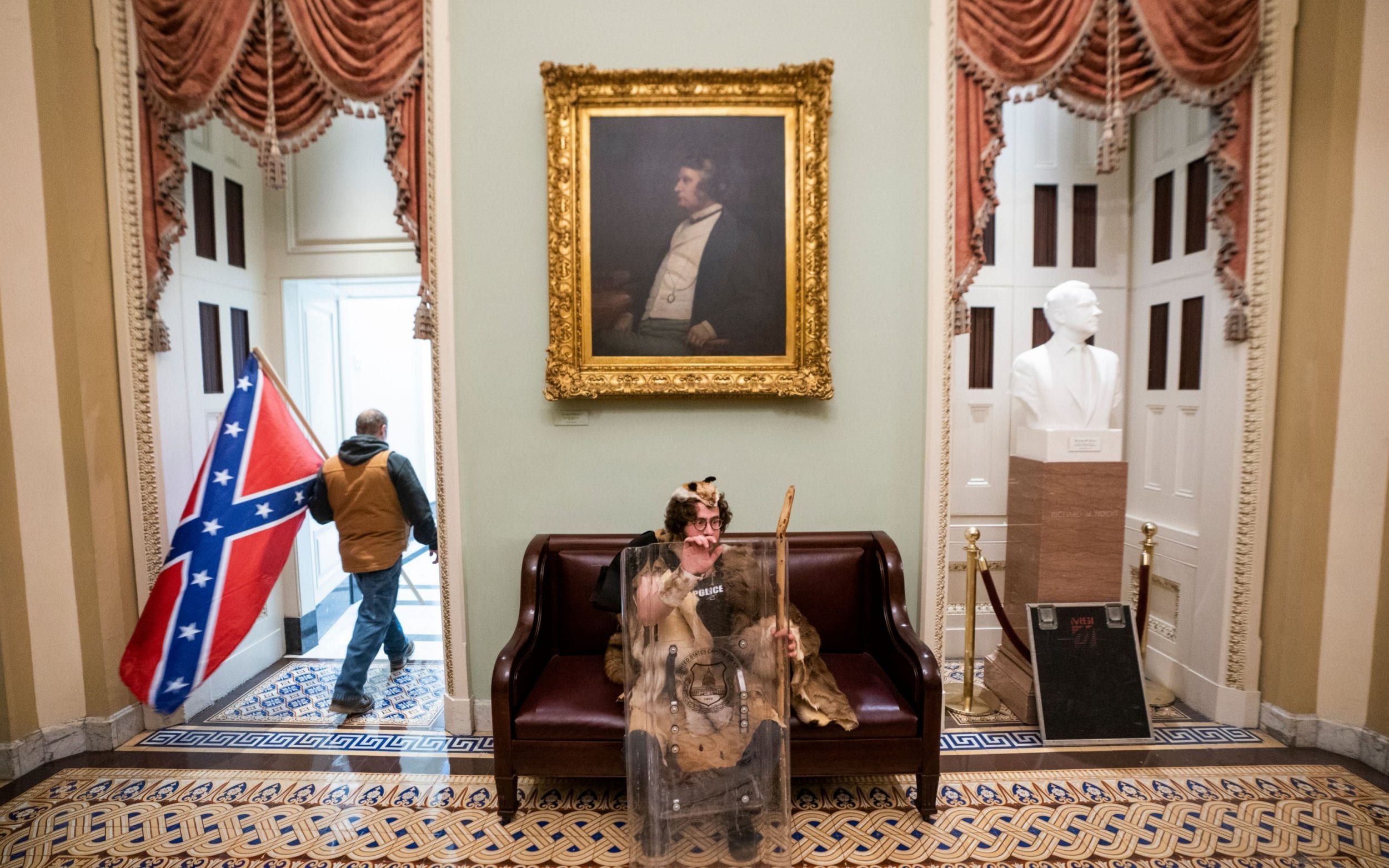 To the extent that we can, let's set aside our feelings about the storming and spend a few moments studying the image above.

There's a lot going on in it! A true triptych: on the left, a standard-bearer marches down the hall flying the Confederate battle flag. To the right, a bust of Richard M. Nixon, unmolested. And on the center couch a fur-clad protestor rests, holding a wooden staff and a riot shield emblazoned with the insignia of the United States Capitol Police, presumably wrestled from an officer during an earlier skirmish.

Our countrymen! Our Capitol!

We've talked before about how the "normal" world seems to be getting stranger whilst psychedelics are becoming more normal. I take last Wednesday as confirmatory evidence of that view. This is the world we're living in! Let's not look away. And let's not come to judgment too quickly.

You might be wondering what any of this has to do with psychedelics. I think there's actually a ton of overlap, even if we overlook the obviously psychedelic overtones of the Q Shaman et al. But I'm not yet able to unpack it all, so for now I'll just touch on a couple topics I've been meditating on since the storming.

Virtualism is basically the idea that America is developing "virtual" spaces as a way of addressing the restrictiveness of the prevailing liberal order without abandoning the functional aspects of liberalism. Virtual spaces are spaces where we can act out our convictions & frustrations without bearing the consequences those actions would bring if they were carried out in a thoroughgoing way.

Under virtualism, protestors in Seattle can set up an "autonomous zone" while still benefiting from municipal services. Portland can undergo months of protests without making any substantive changes to the city council or the city charter. And protestors can storm the US Capitol intent on interrupting the proceedings of Congress, only to have those proceedings go off without a hitch the next day.

Under virtualism, things can look very much like they're going off the rails while under the surface all the important processes just keep chugging along.

I want to learn more about the dynamics of this theory... where does it fall down? What doesn't it explain? At what point does a "virtual" event tip over into its "real" counterpart?

It seems that the difference between last week's "coup" and a proper coup could come down to the decision-making of a small number of American military commanders. So I also want to learn more about the psychologies of those military commanders and the incentive structures they are embedded in.

There's currently an enormous amount of inferential distance in America's social graph. (I can't speak for you, dear reader, but I would certainly have to be seeing things very differently in order to feel like breaking into the US Capitol to disrupt the electoral vote count was a good use of my time. And yet many of us did think that that was a good use of their time!)

Bridging inferential distance is a good contender for being the most important problem we face. It goes by other names too – improving coordination mechanisms, resolving iterated prisoner's dilemmas, defeating Moloch, fixing market failures, internalizing externalities, escaping moral mazes... even the proliferation of labels gesturing at the same cluster of ideas indicates the challenge.

To the extent that people have the same starting point and make the same inferences, they will want to organize their lives in the same way. And it's (much) easier to cooperate with people who want to set up their life/country/world in the same way that you'd like to set up yours.

Psychedelics clearly have some sort of role to play here, though from my perspective we're still very much sorting out what their contribution will be. (I recently covered some early work in this direction: 1, 2)

I'm more sympathetic to Grof's view of psychedelics being "nonspecific amplifiers" of neural processes than I am to the idea that psychedelics necessarily push towards any particular political affiliation, metaphysics, or worldview. (More precisely, I think that if psychedelics do push towards a single worldview, it is a complex one that subverts attempts to taxonomify it.)

To the extent that Grof's view is correct, it means that getting set, setting, and intentions right is very important as we bring the psychedelic experience into our institutional structures. (A truism, sure, but a true one.)

Think again to those people in the photo at the top of this letter. Those are people, who came to their views via a process as complicated as the process that brought you to yours. For most of you, those are your countrymen. You & I are engaged in a vast project of cooperation with them. How are we going to reach these people, our countrymen? How are we going to communicate with them at all?

(And it's same question if you perceive yourself to be on the other side of this: how are you going to communicate with me?)

What kind of country are we all going to build together from here? By what processes & what norms will we build it?